The Climate Change Secrets of Stalagmites 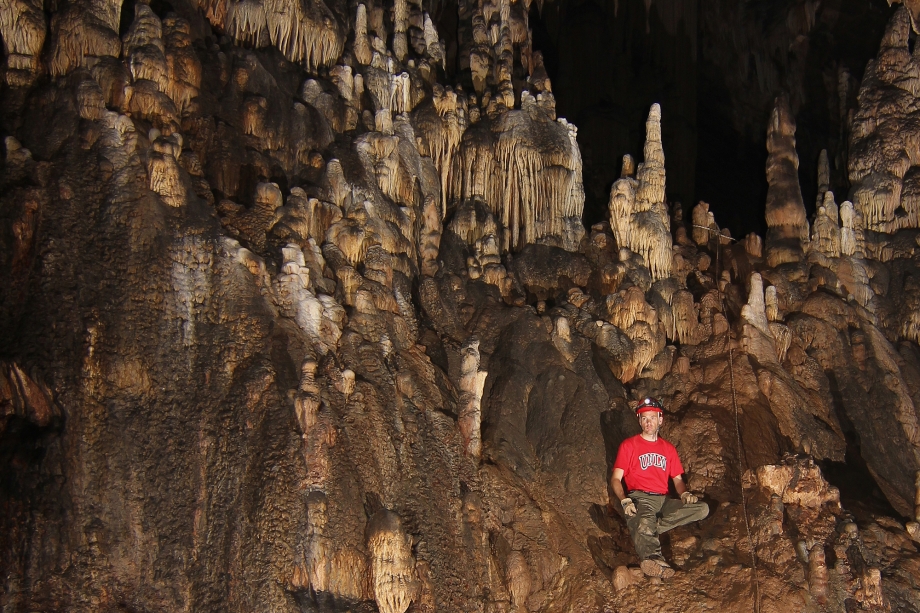 Editor’s Note: To learn more about the wide variety of research being conducted at the university, check on the numerous activities taking place during UNLV Research Week. The week’s events will culminate with “Research @ UNLV,” an annual presentation by Vice President for Research and Economic Development Tom Piechota on the status of campus research. This event is scheduled for Oct. 16 at 11:30 a.m. in the Science and Engineering Building.

It can be dangerous rappelling hundreds of feet deep inside caves, but the cave deposits inside are a “Rosetta Stone” for geoscientists looking to better understand climate history. UNLV researchers are using these stalagmites to better understand past droughts in the Desert Southwest and what can be done to prepare for them in the future.

A research team led by geoscientist Matthew Lachniet recently was awarded a three-year National Science Foundation grant to study drought cycles in the Desert Southwest over the last 5 millennia.

“The reason 5,000 years is important is because it gives us Earth in essentially a modern climate perspective,” Lachniet said. “The big ice sheets from the last Ice Age had melted, sea levels had risen to modern levels, and key ocean-atmosphere processes, such as the El Niño/Southern Oscillation, were established. This gives us a good baseline for how climate can vary in the absence of those big changes.”

This new research helps explain the drivers of climate change that impact human subsistence and water resources in the driest region of the country. The team gathered data from stalagmites in Nevada and New Mexico. The New Mexico caves are strongly influenced by the summer monsoon, while the Nevada caves are the winter season counterpoint. Records from the two regions are compared to show how climate is changing in both seasons.

Scientific climate records typically only date back 150 years, so this research will have an impact on the Desert Southwest by showing what climate is capable of doing on a longer time scale. “When we look at the geologic record, we see there have been significantly drier and significantly wetter periods,” Lachniet said. “We have to be prepared for both a mega drought as well as wetter conditions at potentially different times in the future.”

Lachniet’s work will help scientists understand the ranges of climate variability. “From a policy perspective, we have to recognize that we have been trending toward drier conditions over the last 1,500 years and the warming in Nevada is only going to exacerbate that trend,” he said, noting that “warmer temperatures cause more soil moisture to evaporate so you amplify the effects of drought when climate is warming. This is something we need to plan for now.”

The research team hypothesizes that wet conditions starting 5,000 years ago were linked to an increase in El Niño weather events. The data show that peak wet conditions for the Desert Southwest was 1,500 years ago, at which point the trend started reversing toward drier conditions. The researchers don’t know why this happened, but it is something they are hoping to better understand.

Another goal is to understand how a climate phenomenon, such as El Niño, could have influenced drought history in the past in order to use that information to make future drought projections.

To generate a drought history for Nevada, researchers are using a stalagmite collected from Leviathan Cave in the new Basin and Range National Monument. It can be done three different ways. One way is to measure how fast the stalagmites are growing in the cave. Fast growth is an indication of a wet climate. Another way is to measure the carbon isotopes in the stalagmites, which decrease when wet conditions stimulate production of soils. Yet another way is to measure oxygen isotopic variations, which are a function of primarily the temperature but also of where the moisture is coming from. If there is a lot of southerly moisture from the Tropical Pacific, the values will be higher. Together, the three scientific methods allow researchers to estimate both temperature and moisture histories over the last 5,000 years in great detail.

Though there are many caves, only a small number have the best conditions for climate study, including 100 percent relative humidity, constant temperatures, no cave winds, and the actual stalagmites — free of holes and decay — forming in the cave.

Lachniet noted that stalagmites record the chemical variations that are linked to climate. Caves in particular allow researchers to extend climate records much further back in time than tree rings do. Tree rings are excellent because they provide annual climate records that go back 500 to 2,000 years, but it is difficult to produce older records using trees because they decay, die, or are difficult to find.

Stalagmites allow researchers to go back much further, back to 500,000 years. Lachniet’s research team was allowed to harvest one stalagmite from Leviathan Cave and bring it back to the lab for analysis. Their process starts with splitting the 20-inch stalagmite down the middle and polishing it to reveal the internal layering. They drill to collect powders at various intervals along the growth axis from bottom to top and then use uranium-thorium dating to figure out the age of the powder in each layer. Once the layers are dated, they drill every millimeter to measure the oxygen and carbon isotopes, which allow them to calculate temperature and moisture histories.

Joining Lachniet on this project are UNLV Ph.D. student Chad Crotty and researchers from the University of New Mexico.