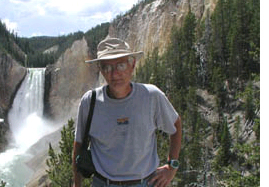 My research and teaching interests are in the fields of igneous petrology and volcanology. Since joining the faculty at UNLV in 1980, I have concentrated on the study of small volume basalt systems, ash-flow tuff stratigraphy and calderas in central Nevada, and magmatism during regional extension. Much of my earlier work was done in the Lake Mead area of Nevada and Arizona and involved mapping, tectonic reconstruction, and geochemistry.  From the early 1990s to the present, my projects have taken me worldwide including work in Antarctica, Mexico, South Africa and Russia.  We just completed a 4-year collaborative NSF grant to study the volcanology and geochemistry of Pliocene-Holocene basalts in the Lunar Crater volcanic field in central Nevada.  Before coming to Nevada, I worked and did research in Wisconsin, focusing my efforts on the study of Precambrian anorogenic rhyolites and granites. Since 1986, I have been involved with volcanic hazard studies for the proposed high-level nuclear waste repository at Yucca Mountain. This work produced new models for the formation of intraplate volcanoes that indicate deep melting of relatively hot mantle to produce basaltic magma.  This idea is very controversial, but recent depth of melting calculations, geophysical models, and tomographic data support the model.  Mentoring graduate students is the most rewarding aspect of my work at UNLV. My students integrate field, geochemical, geochronological, and geophysical data to solve problems about the origin and evolution of magmatic systems. For basaltic systems, our work concentrates on determining the nature and depth of the mantle source. We collaborate with scientists at other universities, the US Geological Survey, and state geological surveys on many of these projects.  Although igneous petrology and volcanology take most of my time, I am also interested in planetary geology and geoarchaelogy.  One of my former Ph.D. students (Audrey Rager) completed a project dealing with rock fragmentation during crater formation and its implication for Mars.  Archaeology is a recent interest and involves a study of cryptotephra found in a rock shelter occupied by early humans at Pinnacle Point, South Africa. This study is in cooperation with Dr. Curtis Marean at Arizona State University,  Dr. Panagiotis Karkanas from the American School of Classical Studies in Athens, Greece and Dr. Minghua Ren at UNLV. This study, done by graduate student Amber Ciravolo and me, demonstrates that tephra in the form of small glass shards originated from the 75 ka eruption of the Toba volcano nearly 9000 km away in Indonesia.   I am now retired from teaching but am still very active in research.